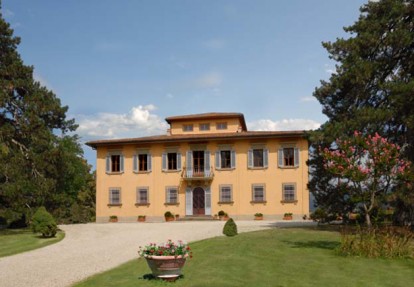 The villa, on two levels, comfortably furnished with many original antiques, consists of:

This villa rental includes Satellite tv, Free Internet access 24h, central heating, telephone, 2 TVs, fully equipped kitchen including dishwasher and washing machine. Fax is available on request. Pets are allowed on the premises.  During your vacation in Collina you will enjoy exclusive use of the swimming pool (5m x 12m), the panoramic terrace with views of the surrounding valleys and the villa’s 10.000 mq walled-in garden with century old trees and a romantic grotto, Grotta dei Delfini. (see photos of the villa)

You can visit wineries, olive oil and cheese producers, with tasting of local products.
Many other destinations in Tuscany, such as Florence (35 km), Arezzo and San Gimignano (70 km) Siena (80 km), Pisa and Lucca (90 km), are all within easy reach. Rome is only 3 hours away, by motorway.
Most destinations can also be reached by train from the station of Vicchio through Florence.

A short history of the Villa
Although no definite records have been found, the origin of Villa di Collina goes back for many centuries to the Renaissance years, and quite possibly to the Middle Ages. The house is first shown on a 17th century map of the Mugello region; it was then much smaller and belonged to the Martellucci family.  The family of the present owner inherited the property in the mid-1700’s.

Like most other country houses in Tuscany the Villa di Collina was the centre of an agricultural system as well as a summer residence. The tenant-farmers’ dwellings around the property are now converted into vacation houses. Still preserved, but no longer used, are the stables, work-shops, wine cellar, and bakery that evoke its agricultural past. Among the additions made in the eighteenth and nineteenth centuries, was a tower with a clock that could be seen for miles.

During the Second World War the house was used as quarters by both the Wehrmacht and the Allied troops; writings in German and English, and the soldiers’ signatures, can still be seen on some walls. You’ll be staying in the large rooms originally used by the owners during the summer months, which have been completely restored as part of a general plan of restoration and reconversion of the property. (see photos of the villa)

We use cookies to ensure that we give you the best experience on our website. If you continue to use this site we will assume that you are happy with it.Ok